Unilever use a wide range of non-animal approaches to assess the safety of their products for consumers and is committed to ending animal testing. Unilever research in this area has one clear purpose: to continue to develop new non-animal approaches that can guarantee that Unilever products are safe, without any need for animal testing.At Unilever, Tino Fonteijn is responsible for the regulatory affairs of all divisions (homecare, beauty & personal care and food & refreshment) in Europe, and for food & refreshment worldwide. 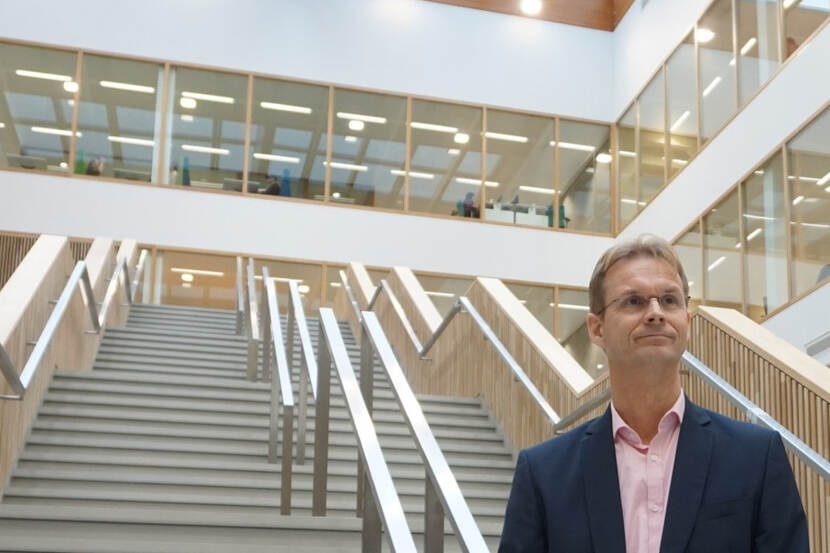 Within this broad package of responsibilities, the legal requirements governing the safety of products and ingredients, and any statutory animal testing laid down by governments, demand much of his attention. Particularly in view of the hugely diverse laws and regulations in the different product groups and countries.

Fonteijn is quick to illustrate one of these differences at the start of the interview. ‘A country like Russia comes under Europe. Animal testing in government laboratories is a compulsory step in getting a homecare product onto the market. These products include detergents, air fresheners and cleaning products. If you look a bit further afield, to China for example, some personal care products are also subject to statutory animal testing. In the EU, this requirement for product testing no longer applies to either group.’ However, occasionally across our portfolio, some of the ingredients we use have to be tested by our suppliers to comply with legal and regulatory requirements in some markets, also in Europe; and some governments test certain products on animals as part of their regulations.

If you’ve been trained to think along traditional toxicology lines, in which animal testing plays a major role, you have to make a huge leap to accept the transition

In Russia, Unilever is working with various international industrial partners and the authorities to prove that animal testing is not necessary for homecare products. ‘We managed this about almost 10 years ago for personal care, an area in which animal testing has very little added value. We were able to prove this then, and now we are trying to persuade people that it applies equally to homecare. Most of the objections are psychological. If you’ve been trained to think along traditional toxicology lines, in which animal testing plays a major role, you have to make a huge leap to accept the transition: From animal testing on products to ingredient risk assessment and accepted OECD accepted non-animal methods with the next ultimate step into NGRA, next-generation risk assessment.’

‘The transition can’t be made one-on-one. You can’t just replace all statutory animal testing with another form of non-animal testing. You need very specific solutions, and there are of course many roads that lead to Rome. To achieve similar results, you need to combine a lot of data and a lot of different types of data. This makes it very complicated. Not only in Russia or China, but in the Western world too.’

When things are not straightforward, all too often animal based approaches to risk assessment are demanded and considered as decisive.

‘But we mustn’t focus all our efforts on far-away countries and think that we’ve got everything sorted here in the West. Chemicals and Novel Foods Ingredients regulations require substantial safety data files. When things are not straightforward, all too often animal based approaches to risk assessment are demanded and considered as decisive.

Fonteijn refers to the procedures for cosmetics. ‘Although Europe legally eliminated animal testing in this sector a long time ago, we are still lacking new rules for replacement models, methods and protocols. As a result, it is difficult to get new cosmetic ingredients onto the market, and innovation is being curbed. Some of my colleagues have been working on alternatives for animal testing, on humane ways of testing the safety of consumer products, for at least thirty years. SEAC, the Safety & Environment Assurance Centre in the UK, is actually Unilever’s capability which drives an aligned company value in relation to our animal testing policy. We post our results and progress on the Toxicity Testing for the 21st Century website. In addition, we are working with Humane Society International to forge coalitions in support of legislative initiatives for a ban on animal testing for cosmetics.

Unilever is dependent on the opinions and wishes of consumers. And the public in our British-Dutch home base is extremely concerned about how we treat animals.

As part of our commitment to ending animal testing, we have a growing number of brands that ensure that neither their products – nor the ingredients they use – are subject to animal testing by suppliers or by regulatory authorities. The commitment of these brands to no animal testing is certified by animal welfare groups (PETA).

As a major commercial company, what is Unilever’s interest in non-animal product testing? Fonteijn: ‘The industry is responsible for product safety. The government monitors and intervenes, on the basis of rules designed to protect consumers. Leaving the ethical aspects aside, Unilever is dependent on the opinions and wishes of consumers. And the public in our British-Dutch home base is extremely concerned about how we treat animals. We take this into account in our product development.’

In terms of content, animal testing is not always the best route to information about product risks.

Processes in the skin

In terms of content, animal testing is not always the best route to information about product risks. ‘Allergic reactions to cosmetics are a common problem. In the past, animals were used to understand the allergic reaction of exposure to specific chemicals. However, it is far more relevant to study the physiological processes that occur in human skin. There’s been significant progress in this area in recent years. We’ve made an important contribution to compiling a risk model for allergenic cosmetic ingredients, which will be useful in the discussions with dermatologists and authorities about skin allergy risk assessment and risk management

Specifying and anchoring achievements like this, and embedding them into the legislation and regulations, is a tricky process. Particularly if the aim is to create harmony, to ensure that uniform rules apply everywhere and to everyone, preferably throughout the world. ‘This would definitely be more efficient in an international market like ours. Of course Unilever isn’t the only major company that understands the benefits. Other multinationals are on the same track. So we are collaborating with industry, governments and NGOs at various levels to identify the regulations that can be applied more broadly.’

And as it turns out, the European regulations on product safety are a highly suitable model. ‘Chinese companies, and even governments, are interested in finding out how we organise things here in Europe. They want to know how they can comply with European rules and which practical steps they can take, to improve their factory operations, for example. We are happy to tell them what we think of the European legislation, what is going well and where we think there is still room for improvement. They find this information useful, and we are helping them along what we think is the right path.’

‘My SEAC colleagues are in close contact with the universities in Leiden, Utrecht and Wageningen and many more institutions around the world. A lot of academic research is still needed before NGRA approaches cover all endpoints and are embedded into all the relevant legislation for all product groups around the world. But I’m convinced that we already have more sound, non-animal testing methods available for guaranteeing the safety of products than are currently permitted. We take advantage of every forum possible to explain what we are doing and what NGRA stands for, and to share our knowledge. Ultimately, we want to drive stakeholder acceptance: NGRA must be reflected in the legislation and regulations.

‘TPI can make a difference in this respect too because without generational renewal, it will be almost impossible to shake off certain traditional toxicological reflexes.’

Unilever has a lot of respect for the TPI (Transition programme for Innovation without the use of animals) initiative: it forms a link between the academic world and the government and helps to build a bond of trust. ‘This is why I was so keen to attend your TPI meeting last March, which was also attended by a lot of the people who work with our scientific experts from SEAC. I was surprised not to see more representatives from the industry. I’m always open to interaction with the people who make the laws and regulations.’

Fonteijn believes that the TPI will be good opportunity to promote the non-animal testing agenda from within the Netherlands. ‘We can expand it to a European setting. This is the level at which we need proposals and a greater degree of acceptance. In turn, it should generate a basis for discussions with the USA and countries elsewhere in the world.’

According to Fonteijn, one of TPI’s strong points is the fact that a lot of younger people are involved. ‘TPI can make a difference in this respect too because without generational renewal, it will be almost impossible to shake off certain traditional toxicological reflexes.’