The international conference isn't just about debate. On Thursday evening, 28 November, two young theatre makers, Anne van Veen (32) and Victoria de Leeuw (26), will take a creative approach to showing what a future free from animal testing might look like. They will do this through a number of thought-provoking arguments and statements, providing a glimpse of how things could be. 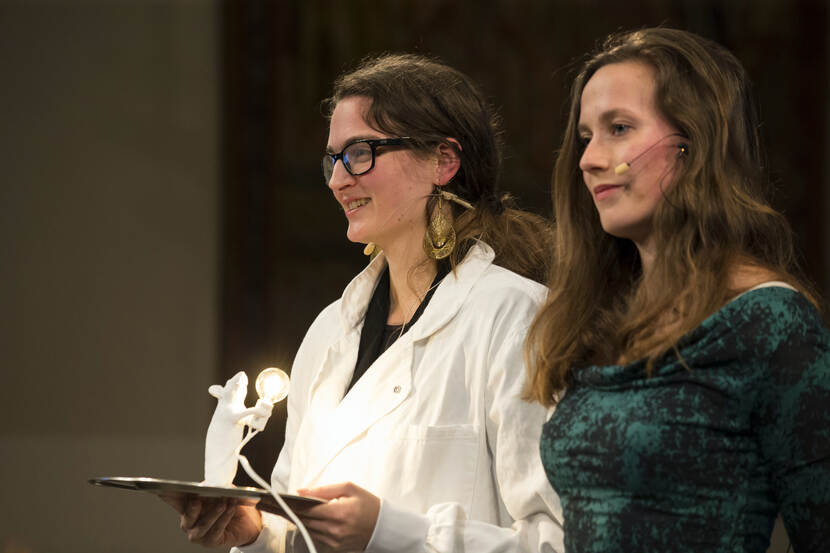 The two scientists wrote the play themselves together with the De Kwekerij theatre collective. "This is the eighth time we’ve performed the play, but the first time we’ve performed it in English. The first time was in 2018 during the Meet the Future Festival," says Anne. She is employed by Utrecht University, where she is studying the history of animal testing in the Netherlands, while she also creates dance productions. Victoria is developing alternatives to animal testing in the lab based on stem cells. She works for the National Institute for Public Health and the Environment (RIVM) and Utrecht University.

The performance dwells upon the history of animal testing. "But we also portray a future that is free from animal testing and explain how we can achieve it. We do this through a number of thought-provoking statements," says Victoria. "We we work with a live musician and an actor. I can’t say who just yet.

One way or the other, we hope that the caricatures that we have created will inspire people to take the next steps. We suggest, for example, that we humans are very anthropocentric. Humans come in first place in everything we do. As a result, we think the lives of people are important but the life of a mouse, for example, is not. Another argument we put forward is that of course it's not wrong to use animals for research, given the fact that we eat animals. We hope that what we do will encourage delegates to engage in discussion with each other."