Henk Smid: ‘We have to think in terms of the unexpected’

One key player in the distribution of government funding to medical-scientific research is ZonMw. Director Henk Smid sees an emphatic connection between this budgeting task and a steering role in discussions on ethics, approach and practical methods in the field – including where animal testing is concerned. According to Smid, much has been achieved in this area, and much remains to be done. 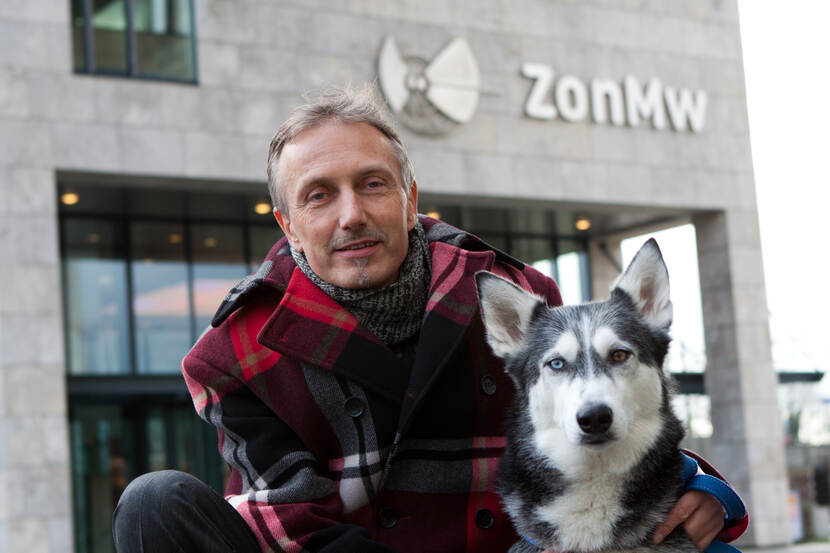 ZonMw, the driver behind programmes like More Knowledge with Fewer Animals (MKMD), is a vital partner in TPI. Smid chaired the committee that published the In transition report in 2015, and served as the editor for the 1976 book Dierproeven in de moderne samenleving (Animal testing in modern society). ‘Our organisation has played a role in the field of animal testing for twenty years and has seen all the developments first-hand.’

MKMD's predecessor was a programme called Limited Animal Testing, which was transferred from the old ZON (National Healthcare Research Institute) to the new ZonMw in 2001. ‘At the time, the scientific community considered Limited Animal Testing to be something politicians and animal welfare organisations were making them do. People didn't take it seriously, and even actively opposed it.’

Those days are over, thanks in part to TPI: ‘Today, we're right in the midst of a paradigm shift. These things never go off without a hitch – paradigm shifts are always painfully difficult. But the acceptance within the scientific community has never been greater. In fact, many scientists are now taking the lead themselves, whereas they used to need a lot of encouragement from ZonMw. They're developing initiatives on their own from among the possibilities they see. Which is to say that there's been an amazing sea change in the past twenty years. There's now support and participation for innovation without the use of animal testing across all disciplines – although I still see a paroxysm of the old thinking now and again.’

‘With animal testing, you're continuing to build on an imperfect foundation’

And there is a second, related turnabout as well. ‘When we started, animal testing was the standard. We wanted to develop an alternative, which we would then need to benchmark against the standard. But in actuality, this was a risky approach: animal testing offers a model that is far from perfect, and using it as the norm was continuing to build on an imperfect foundation. The great thing about TPI is that now, innovation and improvement have become explicit priorities. Scientific innovation has become our primary concern, which has allowed us to achieve better predictive technologies. To my mind, there have been two turnabouts in the past twenty years. Which also goes to show just how long these kinds of change processes take.’

Smid acknowledges, of course, that there are differences between various areas of specialisation. Eliminating animal testing in cardiac research, for instance, is a more obvious path than doing so in brain or cancer research. But, he adds philosophically, ‘What we have to do is think in terms of the unexpected. If we keep doing things just because we've always done them, and can't see any alternatives, we'll only be reinforcing the old paradigm. What we should do is agree with all parties that we're prepared to explore unexpected avenues. If this fails to yield the results we hoped, at least we will not have prematurely ruled out any possibilities.’

Scientists in particular should keep an open mind, says Smid, in order to give new developments a chance. ‘Right now, promising things are happening in a number of specific fields – things we would have considered impossible ten or twenty years ago. Back then, we never could have predicted that we'd be manufacturing organoids today. We can't and mustn't rule out similar innovations in areas where we've yet to see any progress. To my mind, the resistance to change that exists here and there is partly a generational issue. Although I'd add that young scientists don't necessarily have a monopoly on open-mindedness – it can also be found among people in the older generation who retain their unbiased thinking. We know some of those, too.’

The developments have reached critical momentum, Smid says, although they need a bit more time. We are currently in what he refers to as a ‘turbulent’ period. To his mind, one of the largest obstacles for the transition is the fact that there is still insufficient consensus worldwide. A few countries are home to hotspots that are leading the way with innovations like organs-on-a-chip and organoids: the Netherlands is one of these, as are the US and UK. Outside of these hotspots, however, established international interests form an obstacle to dissemination and further development. ‘Changing that mindset will require a lot more scientific debate, in which our emphasis must lie on better science based on more reliable models. Yet in that process, we also mustn’t neglect to point out that such efforts will help reduce animal suffering. Let us remind people that animal testing is expensive, too, and work to make research into alternatives cheaper in the long term.’

‘We have to give risky ideas a chance’

Support for TPI may come from other quarters as well. Smid refers to a policy document that Minister Hugo de Jonge from Health, Welfare and Sport submitted to the House a day before the interview. In it, de Jonge pledged 35 million euros to support the development of alternatives for ethically controversial research involving embryos. ZonMw will be in charge of distributing the money among researchers with relevant proposals, and will naturally take innovation without the use of animal testing into consideration in awarding the funding.

Smid acknowledges the risk of fragmented funding and shares the desire for greater specificity of focus. Still, he can speak from experience when he says: ‘Seed money sometimes enables fantastic, ground-breaking initiatives to bear fruit. We must foster creativity by awarding small amounts, to ensure even risky ideas have a chance. And these ideas have to be allowed to fail – that's part of the scientific process, you have to figure out what doesn't work. But once a project worth a few hundred thousand is showing real blockbuster potential, we have to create consortia, who should then be able to secure bigger contributions.’ In identifying the tipping point, ZonMw trusts the judgement of (scientific) peers, who consider aspects such as whether the results can be replicated and assessed. The largest consortium financed by ZonMw to date received 6 million euros. So is there enough money to go around? ‘Not only to do we need to divide the pie differently, we need to ensure a bigger pie to start with. If we consider innovation to be important, we have to put our money where our mouths are. It's that simple.’

By supporting consortia, ZonMw also wants to promote cooperation and mutual complementary support between institutes. Scientists are increasingly willing to take part in such cooperation. ‘It takes time. Traditionally, they've been in competition with one another. You have to deflate egos and grow mutual trust. We can actually see this happening now. The scientists of today are more willing to take part in discussion; they have gotten better at critical self-evaluation. We try to promote this by letting go of previous instructions and conditions, by establishing fewer and different requirements and by coordinating our testing to the specific programme.’

In short, there is plenty going on in the world of innovation without the use of animal testing right now, and ‘cultural optimist’ Smid feels we're moving in the right direction. ‘Multiple developments are converging right now, which can result in sudden drastic acceleration: artificial intelligence, Big Data, organs-on-a-chip and personalised medicine. There are major surprises in store for us in the coming decade. And I'm proud to have consistently been in the vanguard with ZonMw. Although I have to add that we've been lucky, in that a leading player in this area has also shown a turnaround in their thinking. Our TPI partner, the Dutch Society for the Replacement of Animal Testing (Stichting Proefdiervrij), changed their approach. If they had stuck to activism, we at ZonMw would have taken a much more defensive stance. As it is, we're now able to work together towards a common goal. This is an extremely positive development, for which I'm happy to give them all credit. When it comes to animal testing, there are plenty of opinions, differences in insight and nuance, but certainly no societal deadlock.’ 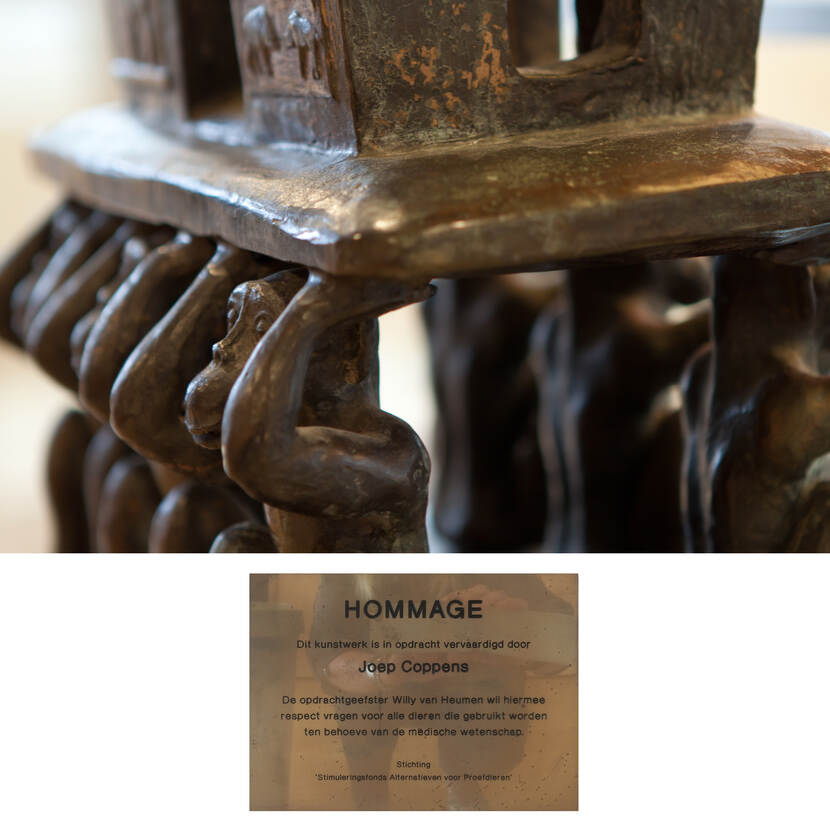 A place of honour has been prepared for the Willy van Heumen Award at the ZonMw offices in The Hague.