Rob Vries: ‘The only way to accelerate the process is to increase funding’

Hubrecht Organoid Technology, HUB for short, began as a start-up at the Uithof, the university campus in Utrecht. This non-profit focuses on alternatives to in vitro systems for developing medicines and observing their effects in the body: innovation without animal testing in its purest form. CEO Rob Vries sheds a bit of light on the company's background and future prospects. 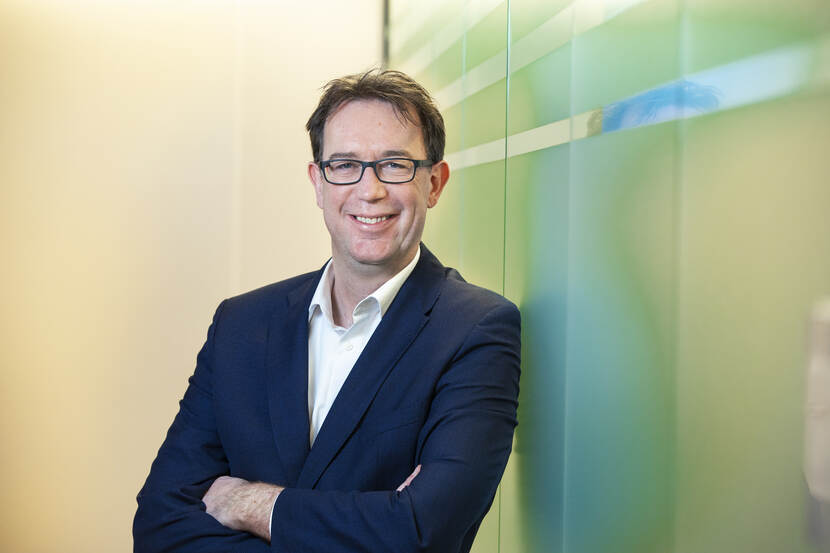 Vries is somewhat surprised at the comment that the concept ‘free from animal testing’ does not exactly feature prominently on the HUB website. Still, he has a ready explanation. ‘Our goal is to get as close to the patient as possible, so that we can optimally develop and apply medicines. We're not really thinking about the fact that this automatically reduces our need for lab animals, although that is a stated objective in our internal strategy. Our focus is on ways to make the transition from scientific study to patient as efficient as possible.’

‘In the 1950s and 60s, we didn't know any better: there was an assumption that animal trials were a necessary part of that transition. And we owe much of what we've accomplished so far to those trials. And we've accomplished a lot. While cell lines certainly allowed us to do some things even back then, animal studies have contributed enormously to our knowledge and medical expertise. In hindsight, there's no way we would have been able to come so far with other methods.’

But now, Vries feels, we've reached the limit of that potential. ‘Lab animals have luckily become obsolete in many areas, such as cosmetics, or impractical, or simply ineffective. It's becoming increasingly evident that humans are not the same as mice. We need methods, models and mechanisms for representing patients in a laboratory setting that are better than what can be achieved with animal studies. And several such possibilities already exist: organoids, iPS (induced pluripotent stem cells, red.) and other cell biology techniques. While it's true that we have yet to find good alternatives in some other areas, those areas are shrinking in number.’

HUB was launched in the academic Hubrecht Institute, where Professor Hans Clevers was conducting stem cell research at the start of the 21st century. Rather than embryonic stem cells, the short-lived cells that enable a complete human to develop in the womb after fertilisation, his work dealt with adult stem cells. These are organ-specific stem cells that ensure the growth, repair and cell turnover in our intestines, liver, skin and so on.

In 2007, Clevers and his research group succeeded in identifying these cells within organs, and were able to mark, isolate and extract them so they could be studied and put to other uses.

‘No one can buy up our patents – healthcare belongs to everyone’

‘Up until then, the problem was that tumour cells, once you put them in a Petri dish, tend to adapt to laboratory conditions. When that happens, they no longer provide a good picture of the people from which they were obtained – which is another reason why lab animals were so essential. Now, at long last and after quite a bit of struggle, we're able to grow both healthy basic cells and sick cells in the lab without them changing, and to let them grow into whatever quantity of material we want. They develop in the same way they would in the human body. This was the basis for the organoid trick, and therefore the foundation of our company as well: suddenly, we were able to grow mini-organs, organoids, with the same biochemical characteristics as the original organs. And as it turned out, we were able to do this not just with one patient in 1000, as had previously been the case, but with biopsies from nearly every patient.’

There is a caveat here, namely that the stem cells HUB works with are derived from a limited set of organs. This set does not include muscles, connective tissue, blood vessels or neurons. ‘As a result, our organoid method isn't suitable for research into cardiopulmonary disease or brain disorders. It does, however, cover the majority of illnesses.’

HUB, which has 40 employees, is a non-profit organisation with societal objectives. It is financed primarily by the pharmaceutical industry, although insurance companies supply funding for special research such as research involving cystic fibrosis. Any proceeds go to the university rather than to shareholders. This business model was also selected to protect the organoid innovation. ‘This way, our patents can never be bought up by a party outside the Netherlands. Healthcare belongs to everyone.’

Organoids are useful both in developing new medicines and in studying the effects of medicines in individual patients. ‘The healthcare industry is moving towards personalised medicine. While this is still a ways off in practical terms, we are already hard at work on methods for determining which patient will benefit most from which medicine. We know that no two people are the same, but we don't know why one body reacts differently to aspirin than another. There's no way to account for such differences in the existing animal and cell models, as these are by definition impersonal. We simply have to hope that, when we get to the clinical stage, the models will prove representative enough, although the results are often rather disappointing. In cancer treatments, for instance, we're pleased with a result of 20%. With organoids, on the other hand, we're already seeing 80% of results corresponding to those in patients.’

‘Medicines are expensive because they require many failed attempts, and animal trials are part of that problem’

Another major benefit of organoids is that they are much better at guiding research. ‘If your clinical results differ from the preclinical ones, you can sort of blame it on the differences between people and animals. Using organoids eliminates that excuse. If a drug doesn't work, there must be some other reason. And that allows you to conduct a more specific investigation. Medicines are so expensive because they often require many failed attempts, and animal trials are part of that problem. Organoids can save us a lot of laboratory animals in the preclinical stage, and make our processes more efficient.’

While scientists are developing better and better alternatives for animal testing, regulatory bodies such as the EMA in Europe and the FDA in America don't approve such alternatives overnight. As a result, it takes a long time to get to the implementation stage – sometimes extremely long. ‘If someone was to inject me with a drug that hadn't been tested on animals, I'd be nervous too. But our job is to prove what's possible. It's up to the regulators to work with us to decide how a new technology will be implemented. And this should be done on a case by case basis, for each illness and each drug. Regulations seem to be moving in the right direction: the use of lab animals is already declining. Ultimately, it will be down to governments and politicians. Because if the law says you're allowed to conduct animal studies, that's more or less the end of it, no matter what the regulator wants. In other words, we still have a long way to go. Especially when you consider that we still have to explain what we're doing, even to other scientists.’

Now that the technology has been developed, what's needed are partners. HUB regularly sits down with the Care Institute Netherlands and insurers, who are eager to exchange thoughts. ‘They are the keenest parties, and they're the ones who will be working with the methods we develop. What we're most interested to learn is what we need to do to make that possible. So it's not about us saying what we can do, but rather asking them what they need. Consultations with the government are a bit more complicated: they're naturally trying to weigh the interests of all the different parties. Many times, I struggle to see the results of that consideration.’

‘We have to focus our resources; that's what they're doing in other countries’

Really, Vries says, the issue is a financial one. ‘The only way to accelerate the process is to increase funding. The research is good, people are willing, but the government needs to put its money where its mouth is. If organoids are to find broad application, we need specific studies for each individual disease – like the cystic fibrosis research we are currently conducting with insurers, for instance. Such studies help us kill two birds with one stone: one, we get a test that enables us to determine the right medicines for each individual patient; and two, we can offer the ultimate proof that organoids are a better predictive model to those parts of academia and the corporate sector that use animal testing.

With all new technologies, you need financing for the initial clinical trials and then after that, they become self-funding. The Netherlands might be the country where organoids were invented, but it's the least willing to invest in them. Despite the fact that, over the long term, organoids can make our expensive healthcare system much more efficient.’

According to Vries, networks such as TPI should concentrate primarily on financing and work to ensure that money is not distributed across too many recipients. ‘When a minister has pledged a nice sum, it defeats the purpose if that sum is then divided across a number of funds that in turn hand out tiny grants under all manner of limiting conditions. We have to focus our resources; that's what they're doing in other countries. Instead of betting on a couple hundred horses, we need to pick just a few and back them to the fullest extent.’