High on an upper storey of the Erasmus MC, with a view of the iconic bridge over the Maas, is where you'll find the laboratory of neuroscientist Ype Elgersma. He studies genetically determined brain disorders such as autism and cognitive disabilities. He innovates wherever possible – and uses as few mice as he can. Elgersma is a supervisor at ENCORE, the centre of expertise on hereditary neuro-cognitive developmental disorders at Rotterdam Erasmus MC. ‘For 70% of cognitive disabilities, the underlying gene mutation has been identified. I research what makes that gene so important, what exactly it does in the brain and whether there are medicines that can compensate for the genetic defect.’

Why does he use mice? ‘You can do a lot with a cell culture, and the possibilities are growing every day, but you can't do everything. We should have no illusions that cultured cells can be used as a stand-in for the complexity of our brains. How do different areas of the brain communicate with one another, and what exactly can go wrong in the process? To study that, you need a mouse at the very least.’

‘After graduation, I didn't want to work with animals at all’

‘Despite their differences, mouse brains offer a usable model for the human brain. There is a high degree of kinship. It's easy to point out the same structures in the brain. Their neurons work according to the same principles as ours. Genetically speaking, mice and humans are 92% identical; when it comes to the genes that control brain function, this figure is closer to 98%. We can also test the behaviour and cognitive ability of mice after switching off a particular gene. The effects are comparable to those in human beings.’

‘After graduation, I didn't want to work with animals at all’, Elgersma says. ‘That's why my doctoral research project used yeast cells. They're similar enough to human cells for the type of fundamental cell biology research I was doing at the time. But yeast doesn't have a brain, and I'm interested in learning ability and memory. So I started looking at glass eels and fruit flies as alternative models. Trouble was: how do you establish if those animals have a cognitive disability? And do these animals have any kind of social behaviour that might offer insight into autism? Which is how, with some reluctance, I landed on mice. My idea was to study how genes impacted their behaviour, learning ability and memory.’

‘Meanwhile, enormous strides were being made in genetics, and many genetic mutations were discovered that result in cognitive disabilities in people. These were exactly the same genes I was dealing with in my research to explore how a mouse's memory works. With that knowledge, I was suddenly able to carry out a targeted search for solutions to benefit specific patient groups.’

ENCORE studies a number of different syndromes, including a few extremely rare ones with only a few patients in the Netherlands. ‘Thanks to mice, we're able to learn more about these syndromes and help both the children and their parents. For each disorder – each gene – we create mice with a similar genetic mutation. And then we use those mice in our research. The process is very careful and conducted according to strict protocols.’

Running his finger down an Excel sheet, Elgersma counts 50 different types of mice, known as lines, that he currently uses in his study. The research involves between 3 and 300 mice of each type, 10% of which are used in live-animal studies, i.e. tests involving social behaviour, learning ability and symptoms such as epilepsy, sometimes with electrodes placed in the brain. ‘The testing can adversely affect the well-being of these mice, but we make sure they experience as little discomfort as possible. The remaining 90% of the mice are only studied post-mortem, such as by isolating slices of brain tissue or culturing brain cells. We anaesthetise the mice before euthanising them as well.’

In the lab, postdoc students and PhD candidates are hard at work, bent over microscopes, computer screens and other equipment. Elgersma pauses for a moment next to one of them. ‘This is a bit of the transition right here. In this culture dish, we're measuring the electrical activity in cultured mouse neurons. We're trying to see how certain substances influence the symptoms of epilepsy. Although it's an expensive measurement model with numerous limitations, we can use it as a form of pre-screening to find promising substances to treat epilepsy before we begin testing on live mice.’ An additional obstacle in brain research is that you must constantly ‘harvest’ new animals for fresh tissue, as brain cells cease dividing after birth. The situation is very different in cancer research, for instance, where runaway cell division is the problem.

The hippocampus of a mouse during an electrophysiological study and as visualised afterwards.

By first using a cell-level culture of brain tissue, or even a yeast or bacterial culture, Elgersma is able to limit animal testing to a minimum. At the brain level, however, he still needs those live mice in connection with pre-screening for humans. ‘Even if we learn something using the cultured cells, we still have to conduct animal trials before moving on to human patients. This is because there can be many reasons why a substance that has an inhibiting influence at the level of a single brain cell might not effectively suppress epilepsy in a living organism. Or it might work, but also affect learning ability or even prove deadly due to side effects that impact channel proteins that are present not only in the brain but the heart as well. Personally, I would never give my child something that hadn't been tested on animals first.’

‘A thinking, working artificial brain in a Petri dish is problematic, ethically speaking’

‘I'd like to explicitly warn against oversimplifying here’, Elgersma says. ‘And against the too-convenient use of the word "transition": in situations where you have no alternative, you're not making a voluntary shift. It worries me when people say: "Anything is possible nowadays, you just have to want it bad enough or have enough money." This is a drastic overestimation of our abilities, as a cell culture bears little relation to what's going on inside our skulls. Imagine if it were possible to create an artificial brain in a Petri dish, one that thinks and works just like ours. Ethically speaking, you’d have a huge problem! In fact, science is moving in the other direction. Due to the inherent limitations of mouse brains, researchers (particularly in China) are switching to primate studies. And even though I'm highly critical of this development, to be honest, it does offer greater hope of finding a medicine against Alzheimer's or autism than those brain cells in a dish.

‘As a scientist, anything you can manage without the use of lab animals is fantastic. Stem cells have made a vast array of things possible in the last ten years. Yet where brain research is concerned, I can't think of many good examples. Still, for some research questions, animal studies simply aren't as informative as innovative alternatives that do not rely on animal testing. For example, we want to find out why a single identical gene mutation can cause very different outcomes in different children. It must have something to do with differences in their genetic makeup. This is a question we can't answer using lab mice, because they are all genetically identical. We might, however, be able to figure it out using research material created from the stem cells of those children.’

‘The best incentive for innovation is the realisation that the lab animal you're using isn't an effective model. If it is, then you – the researcher – would need other incentives to experiment with alternatives, and you'd have to be relieved of the pressure to perform. Because after all, if your study involving alternatives fails to yield 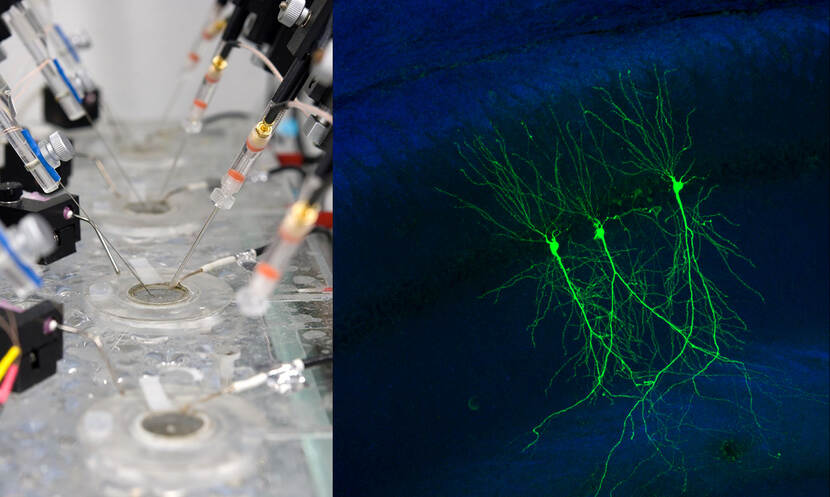 ‘Unfortunately, the costs associated with alternatives are extremely high’

So what is the most effective form of incentive? Elgersma firmly replies: ‘At the end of the day, unfortunately, it comes down to money. But not the money raised by the patients’ associations we work for. That money was donated by parents who want a medicine to treat their children right now. It wouldn't be right to try out random ideas to see if maybe, in ten years’ time, you might arrive on a model that somewhat mimics the function of the human brain.

In other words, the money for innovation without the use of animal testing has got to come from scientific policy. ‘The Erasmus MC has already issued successful calls, the idea being to see if research groups can develop alternatives and deploy new technologies in return for facilities and budgetary means. That's extra money that isn't deducted from the current research grants.’ Still, it's not enough: according to Elgersma, the incentive programmes launched by the government are insufficient. 'Much, much more is needed in terms of funding. Because unfortunately, the costs associated with alternatives are extremely high.’